Be around the light bringers, the magic makers, the world shifters, the game shakers. They challenge you, break you open, uplift & expand you. They don’t let you play small with your life. These heartbeats are your people. These people are your tribe.

College is hard. Finding your “group” in college is even harder.

When I graduated high school, I had the security of knowing I was going to already have my own “group” when I started college that fall. I was going to school at the University of Southern Indiana, and would be living with my best friend from my hometown. We were living with two other girls in an on-campus apartment of whom we met online. We had spent significant time with one of our other roommates over the summer, so I was confident that I would not be starting my first year alone.

Our first year together was great. I spent the majority of my time with those girls, and other girls of whom I met in a sorority that I joined for a small period of time my first semester. Second semester-after I dropped the sorority, I spent ALL of my time with two of the girls I lived with. They became not only my roommates, but my best friends.

I was excited to be getting an off-campus apartment with one of them and continue an amazing friendship with the other starting in the fall of our second year. Little did I know, both of them were moving home after freshman year (both decided to transfer schools closer to home so they could commute, which was fine. Everyone has different routes). Getting the news, I immediately began to panic. I only associated with these two girls and my boyfriend (who was also living at home the next semester) at school. Who was I going to spend my time with?! Who was I going to live with? Eat on campus with? Go to the library with? I went from having the two people that I spent all my time with, to having just myself. I am not one to “put myself out there” and just meet strangers.

I ended up living at home that fall semester with no plans of who to live with. That fall, I began a stats class. Two girls sat in front of me. I recognized one of them from previous classes, but had never spoken to her directly before. I was driving back and forth between my hometown and USI every Tuesday and Thursday for classes, and spent time alone or with my boyfriend in between or after classes, waiting for my boyfriend to get done with his labs because we commuted together on Tuesdays. It began to get pretty lonely, pretty fast. I saw groups of girls who would sit together in the food area, in the library, or go on walks together. I began to get jealous… why couldn’t I find my “group,” but everyone else seemed as they could?

I was picking up a pizza one night in September, after I had gotten back from my Tuesday classes. I got a notification on my phone that the girl who sat in front of me posted on our class Facebook page, asking if anyone had any opinions on off-campus housing for the next academic year. I recognized her profile immediately. I had heard her conversating with the girls around her who sat in front of me, and always thought she seemed like someone I could begin a friendship with. I was always just too shy to say anything to her, or put myself out there, in fear of rejection. When I got that notification on my phone, I decided to do it. Just message her and start a conversation-I never knew where it would lead to. It would probably just be a quick conversation and then I would never actually talk to her in person, right?

We got coffee after class that Tuesday on campus., along with another girl who sat next to her. The conversation was surprisingly easy-going for me. Both of the girls were very genial and gregarious. That “coffee date” ended up turning into a weekly thing after class on Tuesdays. The remainder of the semester, we got coffee. Every Tuesday.

I decided that I was tired of commuting back and forth and I was ready to move back to Evansville in the following spring semester. I decided to “go random” in an apartment off-campus and move into an open room. I moved in with three strangers in January. I was nervous to move back, because although I had began a friendship with the two girls from class, I didn’t know if they would want to continue hanging out with me, because we did not have any classes together in the spring. There was also more of an allotment of free time living in Evansville full time, than there was just in the hours between and after classes on campus in the previous semester.

We ended up getting dinner on campus one night soon after the semester began. Us three were sitting at a table when both of the girls waved over another girl, who I had never met before. This girl had just transferred to our school from a bigger school, and was really good friends with one of the girls I was sitting with, and moved in with the other girl at the beginning of the spring semester (through mutual friendship of the other girl). She ended up sitting with us to eat dinner, and we hit it off right away! The next week, I saw that girl in Starbucks, and we ended up getting coffee together.

One thing lead to another, and a magnificent friendship blossomed with all three girls. We quickly became close-getting dinner, doing homework together at the library, going on walks, and continuing our coffee dates from the previous semester. In the six months I had known the two girls from my stats class, and the three I had known the new girl who transferred to our school, I created a bond with these girls that was strong and unbreakable.

Fast forward another few months, and we have traveled together, cried together, laughed together, celebrated together, and so much more. We are two months away from moving into our apartment together to become roomies for our new academic year at USI. These girls have been there for me since the moment our friendships began, and although the friendships have not been as long as some, they are stronger than most.

I guess there are a few moral to this story…

The first is that, it is important to put yourself out there. When I was feeling lonely, I decided to do something about it. It may not have been a big deal to some to just say “hello!” to a new person online, but it was for me.  I was scared that these girls would think I was strange, or I would not fit in with their views or opinions or hobbies. When I was having a hard time finding my “group,” I put myself out there… and I finally met my “group” when it seemed as if everyone but me had one.

The second is… “depth of a friendship does not depend on length of acquaintance.” I have never read something more true in my life. I have made as strong of a bond with these three than I have with many other friends that I have known since kindergarten in the small amount of time I have known them.

I want to thank not only my best friends, but my shoulders to cry on, my coffee-dates, and therapists. Ashlee, Dakota, and Paige, you have no idea how eternally grateful I am for your friendships and the support system you have provided me at college. Here is to a lifetime of friendship. 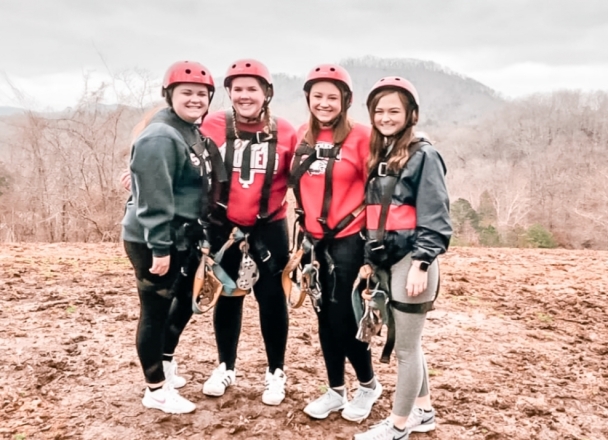 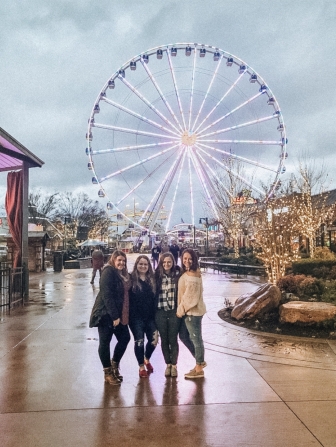 Welcome to the world through the eyes of yours truly. Southern Indiana life, big city dreams. Coffee drinker. Foodie. Vance Joy lover (a little too much). View all posts by Kaydi's Korner